Grab your phone, camera or I-Pad!

The video competition is opened to Finnish middle-schools or high schools. The students will have to send their video for the 5th of May 2022 to anne-laure.rigeade@france.fi

After a first national selection, the best videos of each country will be shared with the other countries for the international Nordic selection! One video per country (hence 5 videos in total for all 5 countries) will be selected and broadcasted in all the 5 countries on the 9th of May 2022, for Europe Day.

From the 16th to 20th of May, these videos will be submitted to a vote by the students of all 5 countries.

Shooting a plurilingual video is the is an occasion to experiment european plurilingualism in its joyful, creative and fun aspects. Hence, the format is free : documentary, fiction, etc. Each participant can give free rein to their imagination !

In Finland, the authors of the 6 best videos will be rewarded by a participation in a training to learn film making with professionals of Academy of Moving People and Images.

1.By the 5th of May 2022 : send your MP4 video to the Institut français de Finland by email : anne-laure.rigeade@france.fi

The films will be send through WeTransfer in a file composed of:

-the surveys authorising the Institut français de Finlande to share the video on its website, its social networks and during the events aiming at promoting French language. Each person who appear on the video and who has participated to the video has to fill in ONE survey.

-the film
This Wetransfer file will be send to anne-Laure.rigeade@france.fi In the text of the mail, the participant will specify his/her first name and family name, his/her school, the title of his/her video, a few lines to introduce and sum up his/her video, along with the list of the participants who appear in the film.

2.By the 20th of May 2022 : vote for your favorite video among the Nordic selection

The authors of the 6 best videos will be rewarded by a participation in a training to learn film making with professionals of Academy of Moving People and Images. This training will take place in Fall 2022, in French and in English. Further details will be published soon !

a device to vlog with your phone ! 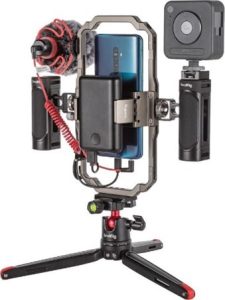