Cinema’s history is often associated with the history of darkened cinemas. However, before these trembling images were projected onto the canvas of a screen, early cinema flourished in the barracks of fairs or under the tents of small Roma circuses. During this cafés cientifique, Laurence Prempain will present, with images, the forgotten history of small Roma circuses in France which, from the end of the 19th century to the First World War, contributed to this development. Why and what films did these travelers show? What did they bring to the audiences who came to see their performances? How was a screening conducted? Why did the cinema finally desert their tents? These are some of the questions that will be answered about the travelling cinema in France.

The intervention will be in French and will be followed by an exchange with the public. 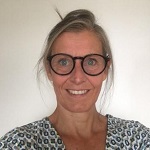 Laurence Prempain is a historian, attached to the LARHRA Laboratoire de recherche historique Rhône Alpes (CNRS UMR 5190). Her doctoral thesis focuses on Polish and Polish-Jewish immigration to France during the inter-war period and the Second World War. Through a framework of analysis based on gender and microhistory, her research focuses on the strategies of avoidance and transgression that men and women developed to cope with discrimination, exclusion and deportation. In the framework of a European project HERA (Humanities in European Research Area), she participated as a post doc (2019-2021) at the University of Helsinki in the project entitled Bestrom (Beyond Stereotypes: Cultural Exchanges and the Romani Contribution to European Public Spaces). Her last two publications at Liverpool University Press under the direction of Eve Rosenhaft and maria Sierra focus on the strategies of French Roma circus families in terms of integration, societal security as well as resistance during the Second World War.